John Gibbons, the Pet Business Professor and president of A GPS for Pet Businesses, has been examining the the demographics of 2020 Pet Spending. For years, Veterinary Services prices have had high inflation. This has resulted in CU income becoming the most dominant factor in spending behavior and a reduction in visit frequency. Consumers paid more, just used Veterinary Services less often.

Things changed in 2017 as low inflation spurred a 7.2 percent increase in visit frequency and a $2.5 billion increase in spending. In 2018 inflation returned to more normal levels. Consumers spent $0.56 billion more (+2.7 percent). However, the inflation rate was 2.6 percent so virtually all of the lift was from increased prices. In 2019, the situation got worse. Consumers spent $0.58 billion (+2.7 percent) more but inflation was 4.14 percent. This means that there was an actual decrease in the amount of Veterinary Services purchased. In 2020 the pandemic hit and consumers concentrated on needs.

For pet parents, that meant that they became focused on Pet Food and Veterinary Services. As a result, Veterinary spending grew $3.05 billion (+14.0 percent).

We’ll start our analysis with the groups who were responsible for the bulk of Veterinary spending in 2020 and the $3.05 billion increase. The first chart details the biggest pet Veterinary spenders for each of 10 demographic categories. It shows their share of CUs, share of Veterinary spending and their spending performance (Share of spending/share of CUs). In terms of performance – six of 10 groups perform above 120 percent, the same as 2018 and 2019. This is more than Supplies & Services with five but much less than Food (eight). This means that these big spenders are performing well but it also signals that there is still a large disparity between the best and worst performing demographics in the “needed” segments. Income remains the biggest factor in Veterinary Spending, but Education is also important as College Grads is a different group from Total Pet. The categories are in the order that reflects their share of Total Pet Spending.

Spending did become a little more balanced but Higher income remains the biggest single factor in Veterinary spending. We see the impact of this in many groups as it often contributes to the big spending disparity between segments. The most notable change was that the 35>64-year-old age group fell out of the 120+ percent club due to a big lift by the 25>34-year-olds.

Almost all of the best and worst performers are those that we would expect. However, there are seven that are different from 2019. This is the same as Services but much more than the three in Supplies and much less than the 10 in Food. This suggests some spending turmoil. The changes from 2019 are “boxed.” We should note:

It’s time to “Show You the Money.” Here are segments with the biggest spending changes in Veterinary Spending.

We saw some turmoil in performance. There was even more here. There were four repeats and 10 segments flipped from first to last or vice versa. Last year they had eight repeats and four flips. There were some surprise winners – 25>34-year-olds and Center City but no surprise losers. In fact, in fouir categories all segments spent more. You should also note the increases were significantly larger than the decreases and 85 percent of 96 demographic segments spent more. Here are the specifics:

We’ve now seen the winners and losers in terms of increase/decrease in Veterinary Spending for 12 Demographic Categories. The 2020 pandemic brought strong  growth in Veterinary spending. However, there was some turmoil as only four segments held their spot from 2019 while 10 flipped from first to last or vice versa, but with almost no surprising winners. The surprise was in how widespread the spending lift was. In four categories, no segments spent less and overall, 85 percent of all demographic segments spent more. This means that there were “hidden” segments that didn’t win but made a significant contribution to the $3 billion increase. These groups don’t win an award, but they certainly deserve … 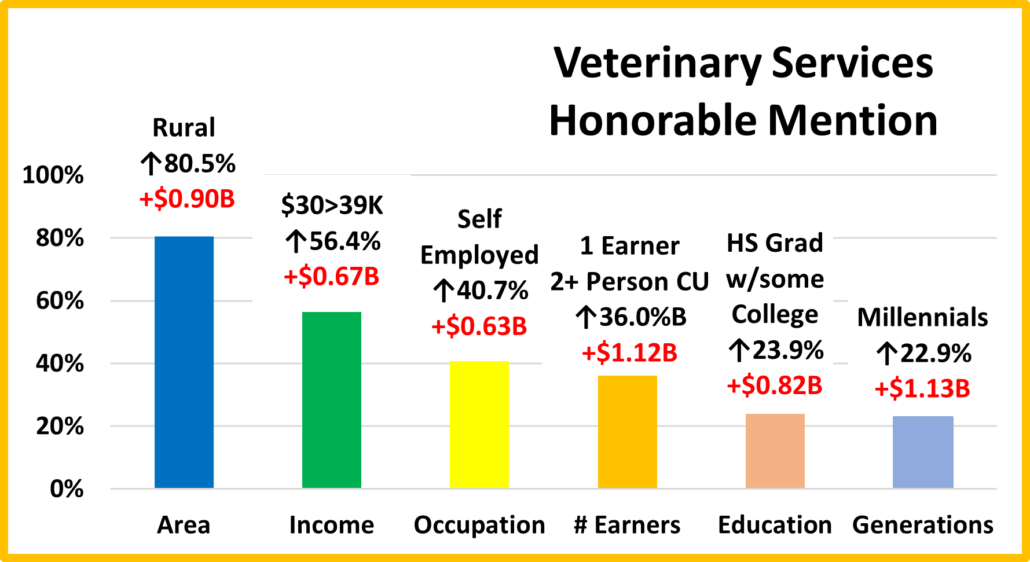 Center City won but Rural came in second – the opposite ends of the population spectrum. Income matters as Self-Employed finished second dto Managers & Professionals. However, spending became a little more balanced in both Income and Education which is reflected by the performance of the $30>39K, one-Earner, two+CU and HS Grads w/some College groups. It also wasn’t all about Baby Boomers and Gen X. The younger Millennials certainly stood up with a $1 billion increase in spending. There are many more groups that could be included as 82 of 96 segments (85 percent) spent more on Veterinary Services. That is significantly better than 57 percent in 2019 and 63 percent in 2018. So 2020 was a good year!

2016 and 2017 produced a combined increase of $3.6 billion in Veterinary Spending as inflation moved to record low levels. In 2018 we had the Baby Boomer Spending “Bust” which especially impacted Food and Veterinary. The Boomers spending continued to fall in 2019. Fortunately, Gen X and Millennials stepped up to produce a small. 2.7 percent increase in both years. In 2020 the pandemic focused Pet Parents on the needed segments. This drove a $3 billion increase in Veterinary Spending. Boomers and Millennials led the way, but the lift was widespread as 85 percent of demographic segments spent more.

Income: Performance generally increases with income and reaches it’s highest level, nearly 200 percent at $150K>. The “halfway” point (50 percent) occurred at $70>99K in 2020. This is the first time that the halfway point has fallen below $100K. Spending may be more balanced, but you can see that there is still a huge disparity.

Higher Education: Performance increases with Education but doesn’t reach 100 percent until you have a BA/BS degree. The performance of HS Grads with an Associate Degree or at least some college is now over 90 percent. Those with a College Degree perform at 131 percent. The disparity is not as bad as Income but still big. Equality in both categories is a long way off.

The performance of other big spending groups is also very important in the Veterinary segment. We identified six demographic categories with high performing large groups. (There were five for Supplies and Services but eight for Food).  Consumers have no control over Race/Ethnicity but in addition to Income and Education, Homeownership, # of Earners and Marriage are also important factors in Veterinary spending. All groups but Marriage are tied to income and their high performance demonstrates that there are still big spending disparities among segments within these categories.

There were some changes of note. Marriage returned to prominence while a strong year by the 25>34-year-olds drove the performance of the 35>64 age group significantly down.

In 2019 Veterinary spending increased +2.7 percent while prices rose 4.14 percent – a net decrease in the amount of Services. In 2020 spending grew +14.0 percent while inflation was 3.7%. That’s over 10 percent in real growth, a very positive situation. Also, although Boomers and Millennials drove the lift, increases were widespread across demographics making Veterinary spending more balanced. In 2021, the overall U.S. economy has largely recovered. We’ll see if Pet Parents continue to spend heavily on Veterinary Services.

Finally – The “Ultimate” Veterinary Services Spending Consumer Unit consists of three people – a married couple and their 18-year-old child. They are 45 to 54 years old. They are White, but not of Hispanic origin. At least one of them has an Advanced College Degree. Both are Managers/Professionals and their child also works. Their total income is $150>$200K. They live in a small suburb, adjacent to a big city in the Western U.S. and are still paying off the mortgage on their home.