In this report we will look at how the pandemic affected the Pet Spending for today’s most “in demand” demographic measurement – by Generation. In 2020, although Gen Z spending is often bundled with Millennials for comparison, we can now compare their annual spending vs the previous year. Using data from the US BLS Consumer Expenditure Survey we’ll look for answers.

We’ll start by defining the generations and looking at their share of U.S. Consumer Units (CUs are basically Households) 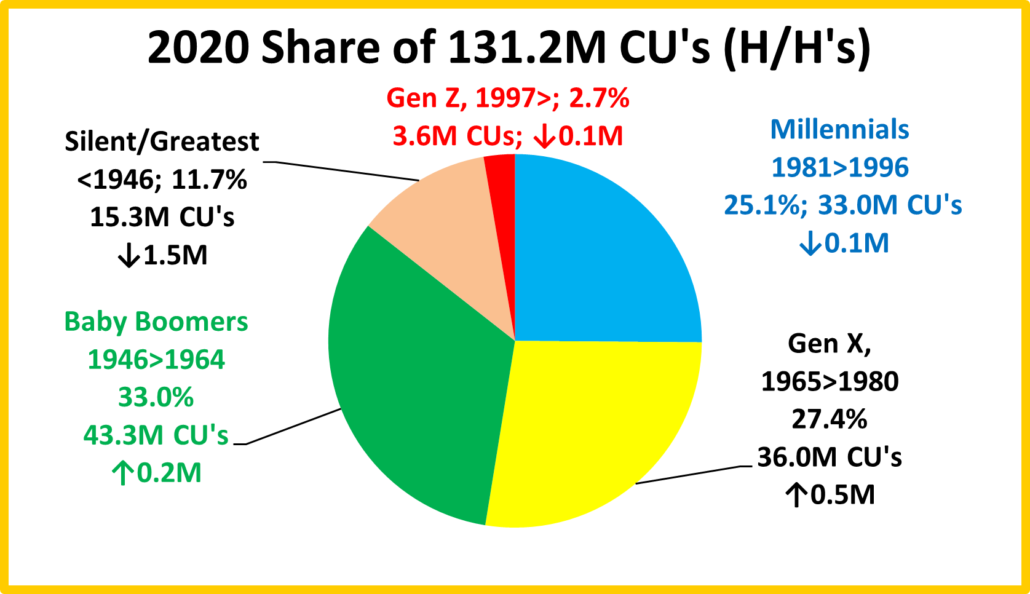 One significant change was the increase in homeownership. This was primarily driven by the Gen Xers and Millennials. Gen Xers still have the biggest CUs but now Millennials have the most children <18 per CU.

Next, we’ll compare the Generations to the National Average:

Now, let’s look at Total Pet Spending by Generation in terms of market share as well as the actual annual amount spent for 2015 through 2020. The 2020 numbers are boxed in red (decrease) or green (increase) to note the change from 2019.

Pet Food Spending is driven by trends – new Super Premium Foods, FDA warnings and even fear of shortages due to COVID. Millennials lead the way in thoughtful changes, but Boomers lead in emotion. Now, on to Supplies Spending.

In 2016 most Consumers value shopped for super premium food and spent some of their savings on Supplies. Supply prices dropped in 2017 and everyone under 72 spent more! Late 2018 saw added tariffs but only Boomers dialed back their purchases. In 2019, the sharply rising prices drove spending down in all groups. In 2020 Millennials and Gen X spent a little more while the older groups spent a lot less.

Next, we’ll turn our attention to the Service Segments. First, Non-Veterinary Pet Services

This segment had slow annual growth until 2017 which saw a small drop in spending due to an extremely competitive environment. Consumers increased frequency but paid less. In 2018, the increased number of outlets really hit home, especially for the younger groups and spending exploded. 2019 brought another small decrease as Gen Xers and Millennials looked for and found a better deal. 2020 brought pandemic restrictions and closures. Frequency and Spending fell.

Gen Xers and Millennials have consistently increased their commitment to Veterinary Services. In 2015, their share of Veterinary Spending was 36 percent. It is now 56 percent. This is a big, fundamental change in spending behavior.