2019 US Pet Spending by Generation: Who Spent the Most? There were a number of factors affecting pet spending in 2019. Food rebounded after the 2018 FDA warning on grain free dog food drove spending down. Tariffs on Supplies really hit home causing a huge drop in spending. Veterinary Services again had a small increase, but it was entirely driven by inflation. After the biggest lift in history, Services spending plateaued in 2019.

In the following report we will look at how these factors and others affected the Pet Spending for today’s most “in demand” demographic measurement – by Generation.

In 2019, we’ll see Gen Z for the first time and the oldest generations will be consolidated into one group. Using data from the US BLS Consumer Expenditure Survey we’ll look for answers.

We’ll start by defining the generations and looking at their share of U.S. Consumer Units (CUs are basically Households) 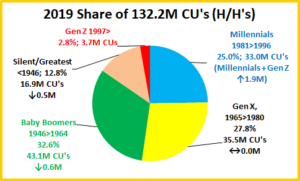 One significant change was the increase in homeownership. This was driven by the Gen Xers and Millennials and overcame a drop by Boomers. Separated from Gen Z, Millennial CU size also grew.

Next, we’ll compare the Generations to the National Average

Now, let’s look at Total Pet Spending by Generation in terms of market share as well as the actual annual $ spent for 2015 through 2019.

The older generations, including Boomers may be starting to fade as 2019 spending for both groups was below 2015. The younger generations are consistently increasing their annual spending which bodes well for the future.

Pet Food Spending is driven by trends. In 2018, the FDA warning for grain free dog food created a turmoil. Boomers dialed back to more regular food. The younger groups were less affected. In 2019 It looks like Gen Xers may have upgraded to even more expensive varieties which helped fuel the big $ rebound.

In 2016 most Consumers value shopped for the super premium food that they had upgraded to in 2015 and spent some of the saved money on Supplies. Supply prices dropped in 2017 and everyone under 72 years spent more! Late 2018 saw added tariffs. Boomers dialed back their purchase frequency. Everyone else was either unaffected or bought more, early. In 2019 the sharply rising prices drove spending down in all groups.

Next, we’ll turn our attention to the Service Segments. First, Non-Veterinary Pet Services

This segment has always found a way to grow every year – until 2017. The small drop in spending was caused by An extremely competitive environment. Consumers increased frequency but paid less. In 2018, the increased number of outlets really hit home, especially for the younger groups and spending exploded. Value and Convenience in 2019 resulted in Gen Xers and Millennials looking for and finding a better deal while the oldest group “got on board..

Gen Xers and Millennials have consistently increased their commitment to Veterinary Services. In 2015, their share of Veterinary Spending was 36%. It is now 55.7% – a 55% increase. This is a big, fundamental change in spending behavior.

In 2019 the Gen Xers kept the top spot in performance. They again “earned their share” in every industry segment as well as Total Pet. They have increased their Total Pet Spending every year since 2015. During this time, their spending has become more balanced and their performance has improved. The only reason that they are not the leaders in Total Spending is that the Boomers have more CUs. Gen Xers range in age from 39 to 54 so they are just entering the peak earning years. Expect their commitment and pet spending to continue to grow.

Boomers led the way in building the industry and are still the “top dogs” in spending. They earn their share and in fact, are the still the spending leader in Total Pet and every segment but Services. However, their CU numbers are beginning to fall – down 1.9M (-4%) since 2016. Their Spending fell again, in 2019 but nothing like the record $6.5B drop in 2018. They should hold the lead in Pet Spending for several more years and be a major force for many more, but the Gen Xers and then Millennials are preparing to take their turn at the top.

Like the Gen Xers, Millennials have increased their pet spending every year since 2015. Their spending is more evenly balanced, and performance has improved. They are growing in CU numbers but their future as the Pet Parenting spending leaders is still a long way off. They need increased income and a more stable home situation. They are educated and well connected. Indications are that they may lead the way in adopting new trends, especially in food. Their progress is good news, but in reality, their leadership is still more than a decade away.

Pet Parenting is more challenging in old age, but they remain committed. 0.88% of their total spending is on pets.

They are just beginning so the numbers are low. Next year we’ll get the first measurement of their progress.

Baby Boomers are still the Pet Spending leaders, but Gen Xers, followed by Millennials are ultimately the future of the industry. Both groups seem ready, willing and able to take their turn at the top. As these groups have risen, Pet Spending has become more balanced across the generations. This bodes well for the continued strong growth of the industry.