The following advisory recall announcement was posted on the FDA’s site on July 3 and confirmed with a Pet Supplies Plus representative. With the recent announcements of the Food and Drug Administration (FDA) and the Centers for Disease Control and Prevention (CDC) investigating contaminated Pig Ear Treats connecting to Salmonella, Pet Supplies Plus is advising consumers it is recalling bulk pig ear product […] The following recall announcement was posted on the FDA’s site on June 26. Attempts to speak with a representative were unsuccessful. Central Aquatics of Franklin, Wisconsin is recalling 96 cases of Aqueon Betta Food (item number 100106051 sold in a .95 oz jar) because it has the potential to be contaminated with Salmonella. Salmonella can affect animals eating the products and […] Read More → Hill’s Pet Nutrition announced an additional expansion to its voluntary recall of select canned dog food for elevated vitamin D. Here is what Tom Olson, media contact for the company, confirmed to Pet Age on May 22: A single can date/lot code within an already recalled case of dog food was inadvertently omitted from our recall list. […] Read More →

The following recall announcement was originally posted on the FDA’s site on April 4. On April 8, Thogersen Family Farm released a statement regarding the recall on their official Facebook page. The company’s sentiments were confirmed by Pet Age with Jennifer Thogersen. Thogersen Family Farm of Stanwood, WA is voluntarily recalling raw frozen ground pet food because it has the […] Read More → The following recall announcement was posted and updated on the FDA’s site on March 29 and was confirmed by Pet Age with Purina Muse. Out of an abundance of caution, Nestlé Purina PetCare Company is voluntarily recalling a limited amount of Muse wet cat food Natural Chicken Recipe in Gravy in three-ounce cans. The product could contain rubber pieces […] Read More → 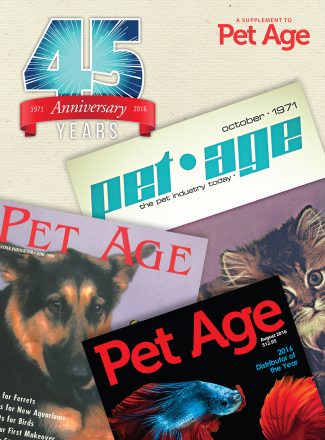 Pet Age produces a variety of supplements throughout the year, that are of special interest to pet business owners and decision makers. To browse our supplements online please follow the link below...

The following recall announcement was posted and updated on the FDA’s site on January 31 and was confirmed by Pet Age with Hill’s Pet Nutrition’s Dr. Karen Shenoy. Hill’s Pet Nutrition is voluntarily recalling select canned dog food products due to potentially elevated levels of vitamin D. While vitamin D is an essential nutrient for dogs, […] Read More → The following recall announcement was posted on The Minnesota Department of Agriculture’s site on January 28. Attempts to speak with a representative were unsuccessful. The Minnesota Department of Agriculture (MDA) is notifying consumers of a recall of raw turkey pet food from Woody’s Pet Food Deli due to salmonella contamination. This recall is being issued after product samples collected by […] Read More → The following warning announcement was posted on FDA’s site on January 23. Attempts to speak with a representative were unsuccessful. The U.S. Food and Drug Administration is cautioning pet owners not to feed Hare Today Gone Tomorrow Ground Chicken/Bones/Organs, lot 12.04.2018, after a sample of the product collected by the FDA tested positive for salmonella and Listeria monocytogenes (L. mono). The product is […] Read More →